Showing posts from February, 2009
Show All

I had arrived in Jakarta in the late afternoon and was soon meeting up one after another with PERCASI Deputy Secretary General Sebastian Simanjuntak, Publicity Head Kristianus Liem, WGM Irene Sukandar and her brother Kaisar Jenius as well as with Drs Bunawan till late despite having to leave at 4 a.m. to catch a flight to Surabaya. Then I was was woken by Sebastian with the sad news that our good friend  Grandmaster and FIDE Trainer Edhi Handoko has passed away at 1 a.m. He had been ill recently but we did not think it was so serious and I was looking forward to seeing him soon at a coaching assignment or at the JAFPA Chess Festival in April. Edhi is well known to the ASEAN chess community at large and I am proud to be able to call him a friend since we first met in 1983 when he was already eclipsing the long time No 1. Indonesian GM Herman Ardianysah. I have seen a lot of Edhi in the past year - meeting him many times at diverse places from Tarakan, Jakarta (JAFPA), Beijing (
Post a Comment
Read more 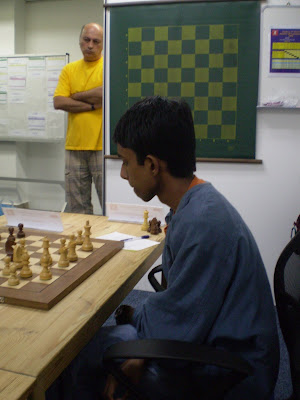 I freely admit that I have long lost interest (and most importantly the motivation) to play tournament chess and for one who has experienced time controls of 40 moves in 2 hours (and even adjournments) I am finding the most commonly used FIDE time control today of 90 minutes plus 30 seconds per move from the start of the game to be very difficult indeed. But now as a trainer of top young talent - since being persuaded to be so at the 1st Asian Club Championships in Al Ain, UAE - I am convinced that it is important to play regularly (proper games) so that I don't lose touch with what my students would face over the board and that this personal "training" is also important so that when I teach I am able to analyse well and not depend on general principles alone. So it was no big deal to agree to play in the recent Intchess 7th Vision Masters where I joined two GM's as the thrid veteran  (perhaps also the designated sacrificial goat!) in a six player double round tour
Post a Comment
Read more

The title of this blog post is an expression I have heard time and time again used by leading trainers - at least those who work with strong talented players - but what does that mean? I think it is simple logic is that when a someone moves from being a player to a trainer, there are three things he or she has to bring with him or her to be able to do the job: 1. Knowledge of the game (he or she must have studied the game and done it well!). 2. Interest in teaching (especially experience at the level he or she is attempting to impart the relevant knowledge together with the minimum necessary playing strength). 3. Willingness to share what he or she knows because the trainer is now working for the success of his or her student and so cannot have personal ambition or approach the training as if he or she were still playing. Items 1. and 2. above are closely related and each trainer must ask himself or herself at which level he or she can be most effective and of course 3. i
Post a Comment
Read more
More posts