Showing posts from January, 2011
Show All 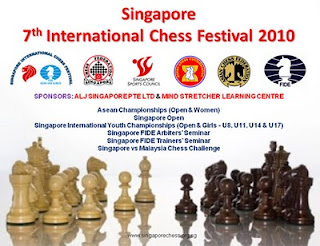 Taken by surprised by certain developments regarding a late request and then an actual agreement to provide financial incentives, I found myself flying to Singapore very late on New Year's Eve and even playing in the fourth and final round of the long running Singapore-Malaysia Chess Challenge on New Year's Day, officially the 2011 edition, played over 38 boards with two rounds of classical chess and two rounds of rapid chess. History was made in that Malaysia won and kudos are well deserved to the team and especially the young kids that did so well. I was not present the first day but was told that after round one Singapore has taken a 7 point lead and everyone was bracing for a hammering but then that strange fellow Ignatius Leong (I am being polite not to call him something else), the SCF President, also recently reelected FIDE General Secretary, expressed his sincere hope that Malaysia would win and that sentiment was well beyond that of a polite host!
Post a Comment
Read more
More posts