Showing posts from March, 2011
Show All 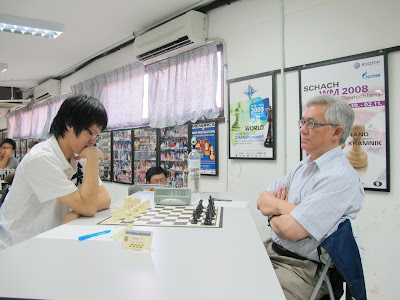 Today I dropped by DATCC at the same old Wilayah Complex car park location to wish participants in the National Closed Championship before the final round every success. I appreciated the handshakes from the likes of Jimmy Liew (in photo at right facing down Lim Zhou Ren) and Eddy Fong, even Najib... after all local chess is a very small community and sad to say that is reflected in the fact that the new DATCC was pretty much the same run down old DATCC. Don't get me wrong. Better a place for local chessplayers to have their events on the cheap and I commend the efforts of those who are clearly trying to keep it going. But the reality is that with such a venue for as important and event as a National Championship, Malaysian chess is clearly going backwards and for those would chose to differ, ask yourself if indeed you could bring a potential corporate sponsor (unless he or she is a crazy chess enthusiast) to DATCC.
Post a Comment
Read more
More posts