Showing posts from May, 2020
Show All

Interview on ChessBase India - The Vision of the FIDE Trainers Commission 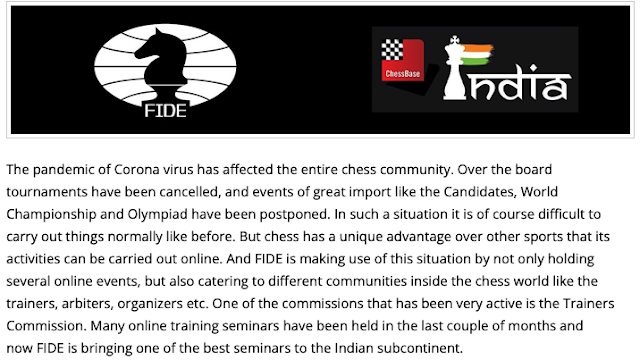 By Peter Long Today's FIDE Trainers Commission is very different from what was seen for over a decade. What we have now - even though still a work in progress - is the implementation of the reform vision of FIDE Senior Trainer and Grandmaster Jacob Aagaard who was appointed the new FIDE Trainers Commission Chairman following the election of Arkady Dvorkovich as FIDE President at the FIDE Congress held concurrently with the Batumi Olympiad in 2018. It took us several months in the transition period to get on top of the issues but then it became very clear what was needed. 1. First, the FIDE Trainers Commission never really evolved from the necessary first stage of the first few years which was to identify and certify leading trainers and to award them the appropriate trainer titles to build a base and credibility. 2. Second was that instead of helping develop the skills of trainers attending seminars, what happened and actually took place was a largely abbreviated training
Post a Comment
Read more
More posts