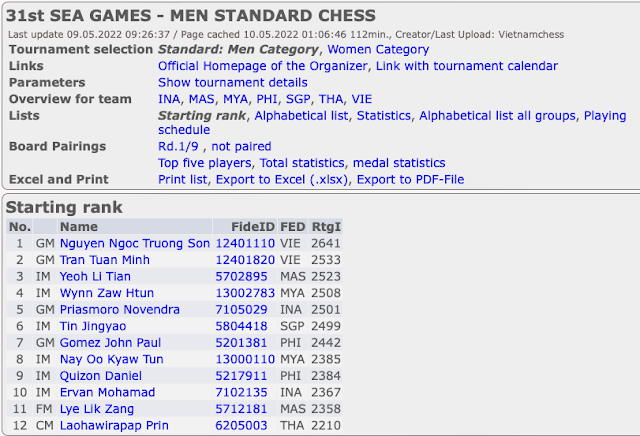 A very even field - the big three of host Vietnam, Philippines and Indonesia are joined by non professionals Malaysia and Singapore - but with no favourites among those in the top half, remembering that the defending champion is Yeoh Li Tian.

Despite being under martial law and in state of essentially civil war  since the military coup Myanmar is also taking part together with Thailand but neither have players able to challenge, Wynn Saw Htun already a veteran and young Prin Laohawirapap is not even their best player.

Brunei is always at the Olympiad (118th), and while Lao and Cambodia also intends to be in Chennai, India, where the 44th World Chess Olympiad will take place, all three are again not taking part in our regional games, showing their low level, and so the men's event will have seven from ten countries. 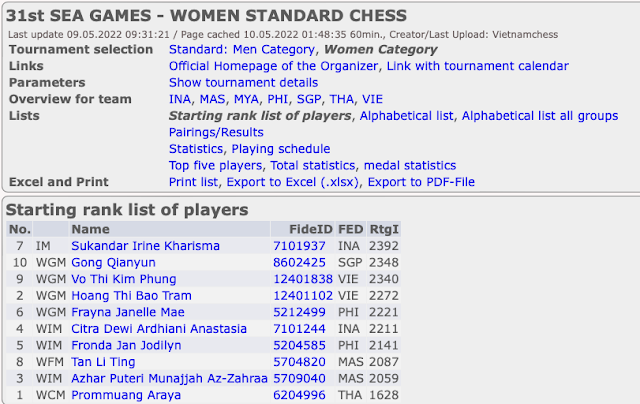 Women's chess has significantly declined - we have the single (and well supported professional) as the top seed and clear favourite - and any real challenge would realistically come from the second seed and maybe also the third and fourth ranked players from the host country.
There is no doubt of course all the others could be spoilers and help decide the winner!

So again we have the big three of ASEAN plus Malaysia, Singapore and Thailand, nothing changed from the previous SEA Games, so six from ten countries.