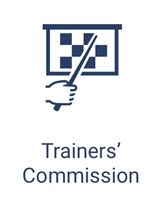 We have received many enquires as to eligibility for captaincy at the coming 44th World Chess Olympiad in Chennai, India.

See extract from the regulations:

5.1.    All Head of Delegations/Captains/Trainers at official FIDE events like Olympiads, World, Continental and Regional Team Championship, are required to be a licensed trainer, and for World and Continental Junior, Youth, Cadet and Schools Championships, to be a licensed trainer or International Organizer, failing which, will need to apply for a captaincy license.

5.2.    Only licensed trainers and holders of the International Organizer title, as applicable to the official FIDE event, or those with a captaincy license and Federation Officials given special permission, are allowed access to the official playing venue and playing area (as per the tournament regulations) and be entitled to free board & lodging (where offered by the organizers).

5.3.    If a Federation is unable to organize for a licensed trainer or an International Organizer to fill a Head of Delegation/Captains/Trainers at the designed official FIDE event, TRG will issue a captaincy license provided the following conditions are met:

a) An application must be made together with a registration fee which will only be valid for that particular event.

b) Compulsory attendance in an orientation course to be jointly organized by TRG and the FIDE Events Commission.

TRG has agreed with the organisers of the Chennai Olympiad that the following options, consistent with the regulations above, are available:

Please direct any questions by email to trainers@fide.com with copy to indianchessfed@gmail.com