The FIDE Trainer Seminars and Workshops for 2022 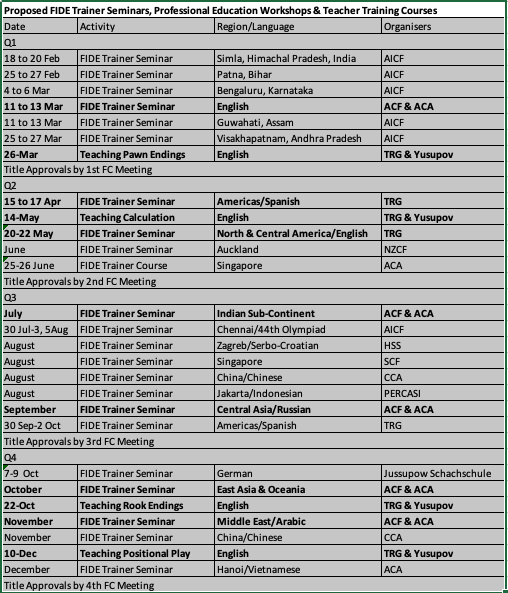 To date seven seminars have been organised, with another in a week's time. Of these, five were in India under their "Chess for All" initiative, taking capacity going to large cities which still somehow were relatively underserved in this respect.

Our professional trainer education and development workshop series led by FST and GM Artur Yusupov had a great start and the second will take place this weekend.

June will see the first of our DI/NI courses where trainers working with young players up to 1700 level, even to 2000 level, will be instructed in how to teach and develop talent in the quickest possible time, also giving them a foundation from which they can go further.

On-site seminars are now being allowed with select Federations able to meet our standards and remain independently supervised and with an assigned examiner.

First up is the New Zealand Chess Federation and then Croatia, and Singapore, of course also China, Indonesia, and Vietnam, all which will be held in local languages, a challenge that we have been working hard to overcome with the preparation of suitable lecturers.

We will of course have the second of our two Spanish Americas seminars that we have organised in the last two years, and the German language seminar.

The Asian Chess Federation will again organise four regional seminars: Indian Sub-Continent, Central Asia, East Asia & Oceania, and Middle East and as always, during the Olympiad, this time in Chennai, there will be a seminar.

A disappointment is Africa which started so well with regional seminars in 2020 in their four main international languages: English, French, Arabic and Portuguese but since then have not done so.

I can say the same for many underdeveloped countries, the many with few chess players, struggling even to have a national championship, often having no young players in even regional cadet, youth and junior competitions, all declining offers to help them, for free, to build capacity of their local coaches.